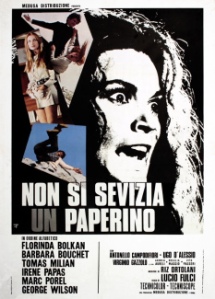 “Which would you prefer, a kiss or money?” – Patrizia

This isn’t a giallo that I had seen but being that I like the films I’ve seen from Lucio Fulci, I really had to give this a watch. And man, I’m glad I did, as it is a damn good motion picture and possibly Fulci’s best out of the movies I’ve seen.

It does what the best giallos do and that’s tapping into a noir structured narrative with a grittier, harder edge and elements of horror. Fulci would go on to be one of the best Italian horror directors and this film really shows the guy experimenting with his stylized violence and fairly gory practical effects.

What I liked best about the film is that even if you figure out who the killer is early on, which I did, the movie still throws so many curveballs that the reveal doesn’t matter as much as the journey. This is well structured and well written with several layers that enrich the the larger story and give it a lot of depth.

There’s a lot to take away from this movie and a lot of prime meat to chew on.

I don’t want to get too much into the plot, as I don’t want to spoil anything. However, it does do a lot of taboo things that are designed to make you feel uncomfortable. But it’s those moments of discomfort that really show you how great of a visual storyteller that Fulci is. He conveys pretty stark messages in his moving imagery and not much has to be explained. That’s real talent, especially when compared to many of the films today, which insult their audience’s intelligence and have to spell out everything and usually more than once.

The cinematography is superb, as were the locations used in the film. As an American watching this, it feels otherworldly or like it is set in a time much earlier than when it actually takes place.

The musical score by Riz Ortolani is also one of my favorites of his that I’ve heard. The music really gives a major assist to the visuals and they work in harmony like a perfect marriage: conveying emotion, tone and texture.

Plus, the acting is great. It’s hard not to crush on Barbara Bouchet, let’s be honest, but man, she’s so damn good in this. But then, so is Tomas Milian, who I mostly know from the spaghetti westerns he did in the ’60s and ’70s. They had real chemistry together and both of them enhanced each other’s performances. It’s a pairing I wish I could’ve seen more of in other films.

All in all, this may be the best of Fulci’s pictures that I’ve seen and it makes me want to delve headfirst into his other giallo offerings.

Rating: 8/10
Pairs well with: other giallo films, primarily those by Fucli, Argento and Bava.