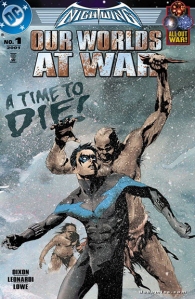 While this was released as a one-shot comic book, it is tied-in to a larger story arc. Therefore, working as its own story, it kind of falls flat, as I wasn’t privy to the details and didn’t have the context to fit this into.

It’s pretty enjoyable though for those who like the relationship between Nightwing and Oracle. They’ve been my favorite semi-romantic pairing in comics since it was first teased and they’ve always had good chemistry when written well. Thankfully, this benefits from having Chuck Dixon as the writer, as he really gets both characters and their bond.

And ultimately, this story is carried by that bond.

Other than that, this sees our heroes traveling backwards through time in an effort to arrive at a place where the story’s unseen villain can’t touch them and thus, alter their present and future.

This is pretty short but we do get to see several different scenarios of the heroes coming into a new time and having to immediately deal with the threats waiting for them. In the end, they have to find a way to outwit the villain who is orchestrating these traps.

I wasn’t aware that this was tied to a larger plot and it probably would’ve read better had I known that beforehand and actually read the whole arc. However, there is still enough to sink your teeth into and it just further solidifies why these two characters are two of the most beloved in DC Comics lore.