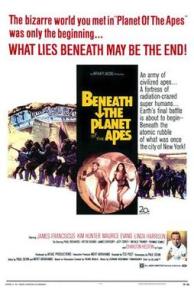 “Glory be to the Bomb, and to the Holy Fallout. As it was in the beginning, is now, and ever shall be. World without end. Amen.” – Mendez

From memory, I always considered this to be the worst of the Planet of the Apes movies. I’m pretty sure I’ll still see it that way, once I get done revisiting the original five pictures.

This is just a really weird film and a major misfire, after its great predecessor and its mostly enjoyable sequels. Plus, this ends in a way that sort of kills the franchise. I’m not sure how they explain away this film’s ending in the next movie because I haven’t seen it in years, but this movie ends with the destruction of Earth.

Anyway, Charlton Heston returns but he’s only in the opening of the film and then in the third act. The lead role was given to James Franciscus, who looks an awfully lot like Heston, even though he’s a new character. However, he eventually meets Heston and works with him in trying to free themselves from the apes.

Beneath the Planet of the Apes is so bizarre, though. And I don’t mean that in a good way.

Apart from the apes, we meet a new group of antagonists, which are humans with psychic powers due to their exposure to radioactivity from Earth being nuked by mankind, earlier in this timeline’s history. The people also wear masks to cover up their disfigured faces. However, their masks are realistic versions of what their faces would look like without being destroyed by radiation. It doesn’t make a lot of sense and it’s just a stupid plot device so that the studio could cheap out and only use makeup effects sparingly.

In the larger Apes mythos, it’s almost best to ignore this picture. It doesn’t really fit with what comes after it and it threw a curveball into the narrative and concept that was so bad, it was never revisited or re-adapted in future remakes.

Apart from that, this is still a good looking film for its time but it’s still pretty obvious that the studio was trying to do things on the cheap: recycling previous set pieces and props while using less makeup effects and diverting away from the apes as the biggest focal point.

Rating: 5.25/10
Pairs well with: the four other Planet of the Apes movies from the original run, as well as the television show from the ’70s.