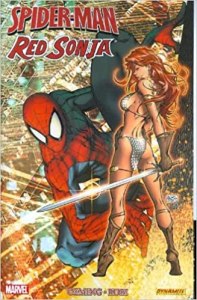 Man, I really wanted to like this but it left me mostly, underwhelmed and baffled.

A long time ago, back when Marvel had the full-time publishing rights to Red Sonja, they did a one-off story about Mary Jane being possessed by Sonja and then had her team-up with her boyfriend, Spider-Man.

This longer, five-part miniseries is just a rehash of that story, as opposed to having Spidey actually team-up with the real Sonja in the flesh.

Still, it’s not the worst idea for bringing these characters together but doing it a second time seems lazy and uninspiring. But then, so does the rest of this story.

Red Sonja’s villain Kulan Gath shows up in modern day New York City to create havoc because that’s what villains do. He then uses Venom to try and take out Sonja and Spidey but ultimately, he steals the Venom symbiote for himself because this story is already cookie cutter as shit and aiming low seems to be what they were going for.

We also get suped up magical versions of well-known Spidey villains because why wouldn’t we?

I don’t know, more often than not, crossovers like this are really bad and half-assed schlock made to grab a buck from multiple fan bases. I guess this one didn’t strive to be anything different.

I mostly liked the interior art though and the covers were solid.

Rating: 4.25/10
Pairs well with: other Red Sonja crossovers or stories that put her in modern times.