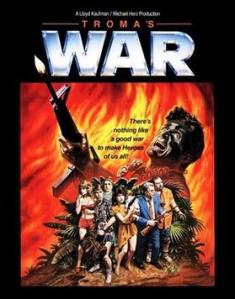 “You try chopping Siamese twins apart with a machete and not change.” – Nancy

I love everything Troma stands for, always have. However, I don’t enjoy a lot of their movies because even if they’re intentionally bad, it is often times too much and despite a few funny moments, here and there, their films get buried too deeply in their own schtick.

However, there are some films that they’ve made that are really damn good for what they are. While Troma War isn’t their best offering, it is definitely one of their better ones and I probably rank it in my top five.

This movie is absolutely insane but that should be expected considering this came from the mind of Lloyd Kaufman during his peak. Plus, it was directed by Michael Herz, who has been behind the camera for three of the Troma films I’d rank above this one: The Toxic Avenger, Class of Nuke ‘Em High and Sgt. Kabukiman N.Y.P.D.

The story here is bizarre but basically this picks up after a plane has crashed on an island. The survivors then have to fight a war against the madmen that occupy the island. But this is a Troma film, so things can’t be that simple and cookie cutter.

Honestly, it’s a hard movie to describe and it sort of has to be seen to be believed.

Like all things Troma, one should expect terrible acting, questionable direction and the cheapest practical effects imaginable. However, this is just as much imaginative as it is offensive and that makes it much better than the standard Troma schlock.