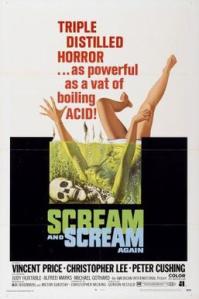 “Fastest transition in the world: from human to corpse. It doesn’t do to get the two confused, or you’ll never be successful.” – Professor Kingsmill

While I’ve always seen Amicus as the poor man’s Hammer, I’ve still found most of their films to be really enjoyable, especially those starring Peter Cushing, Christopher Lee or Vincent Price. Now throw any two of those guys together and it’s usually going to make the picture much cooler. Throw all three of them into the mix, however, and you might break my classic horror-loving mind.

Sadly, this does not cut the mustard, whatever that even means. I don’t know, it’s an old adage people say.

Despite this having the Holy Trinity of Price, Lee and Cushing, it’s a really bad movie that just barely keeps its head above water simply because it has these three great actors in it, hamming it up and looking like they’re enjoying what they had to know was a terrible picture.

One problem with the film is that the three legends are barely in it. Cushing is in it the least while Price and Lee are sort of just there for the added star power. Their roles are really just glorified cameos. But you do get an interesting finale that features Lee and Price together.

This is a really weird film and the middle act is bogged down by an overly extensive car chase and manhunt sequence. While I kind of enjoyed that part of the film, I just don’t see how it will connect with people that don’t already love this sort of schlock.

For a film about a mad scientist and super soldiers, this is pretty boring. I still weirdly like it but when I think about popping on a film starring any of these legends, this one is usually pretty damn low on the list. In fact, I only watched it this time to review it and because I hadn’t seen it in about twenty years.

Rating: 5/10
Pairs well with: other films featuring Vincent Price with either Christopher Lee, Peter Cushing or both. Also, other Amicus horror movies.