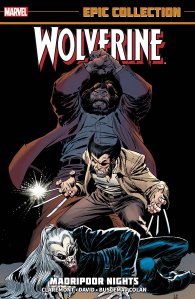 As big of a Wolverine fan as I am, I have never read his earliest solo stories that revolved around his time in Madripoor when he was going by the name of “Patch”. I knew enough about this era but nothing is ever as good as reading it for yourself.

I read this on Comixology after buying it pretty cheap during a Wolverine sale. Normally, it’s like $30 but I know I got it for less than $10 and it was well worth that price tag.

This is a beefy collection that covers the first 16 issues of his solo comic, as well as the story that came out just before it and another comic that takes place within the same time frame. It makes for one nice long epic of Logan’s life in Madripoor. I’m not sure if he sticks around there after this collection and for how long but this really gives you the important stuff from that era.

We also get a cool plot that teams Wolverine up with the Gray Hulk a.k.a. Mr. Joe Fix-It for the first time. It’s a pretty cool tale and it also fits well within the larger tapestry that sees Logan trying to fight the criminal underworld in this fictitious Asian island nation.

Almost everything here is written by the great Chris Claremont, who probably knows Wolverine the best. Some of this is also written by Peter David but he’s a legend too and he knows how to write a story with great energy.

Ultimately, this wasn’t close to being my favorite Wolverine story, and it may actually be a bit underwhelming because of that, but it is still damn entertaining and really reflects a truly unique time in the character’s mythos.