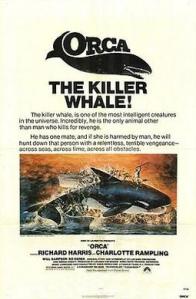 “I’d insisted on leaving South Harbor with them. I told myself that somehow I was responsible for Nolan’s state of mind. That I had filled his head with romantic notions about a whale capable not only of profound grief, which I believed, but also of calculated and vindictive actions, which I found hard to be believe, despite all that had happened.” – Rachel

I was originally introduced to this movie by my 6th grade science teacher circa 1991. While most of the class was dozing off, I really enjoyed it, even if it was one of several dozen ripoffs of Jaws.

Orca is somehow better than almost all of the Jaws wannabes, except for Joe Dante’s magnificent Piranha. But the reason for that is due to the movie’s ability to create great sympathy for the killer killer whale as well as Richard Harris’ ability to take a total bastard of a character and make him somewhat noble and redeemable.

I also really enjoyed Charlotte Rampling in this, as she added so much to the film’s context in a great way, as well as having a really organic chemistry with Richard Harris.

Being that I haven’t seen this in its entirety since that day in 6th grade, I was actually pleasantly surprised by the film all these years later. It was actually better than I remembered and there were some scenes I had completely forgotten, like the whale fetus on the boat deck scene, which my 6th grade teacher may have omitted from the movie when he showed us his VHS copy of it.

While this was a Dino De Laurentiis produced picture, which means it had a limited budget, most of the special effects were damn good. Even though I knew that some of the whale celebration moments with destruction in the background were composited shots, they actually look pretty great for the time, even when being seen in modern HD.

The two sequences that stood out to me the most were the coastal house being destroyed by the whale and collapsing into the sea, as well as the scene where the female whale is gruesomely captured and maimed, leading to her death and the death of the baby she’s carrying, all while the male whale watches on in agony. It may sound kind of cheesy but it’s surreal and haunting. Most importantly, it was incredibly effective. You felt the whale’s pain and understood his quest for vengeance against Richard Harris’ captain character.

I also really dug the Ennio Morricone score. The guy is an absolute legend and his score here is enchanting while also being brooding. While it’s not on par with John Williams’ Jaws score, it is very different and fits the tone of this movie, which wasn’t exactly a Jaws ripoff. This just used the timing of its release to capitalize off of the killer marine life craze of the late ’70s.

The story is actually closer to Moby Dick and just modernized with a different species of whale. But that didn’t stop it from potentially taking a shot at Jaws by having the killer whale murder the crap out of a great white shark at the beginning of the film.

All in all, I was really satisfied with this. It’s not an all-time classic but it is better than most killer animal ocean movies not named Jaws.

Rating: 7.25/10
Pairs well with: other killer animal horror movies, especially those that take place on the water.