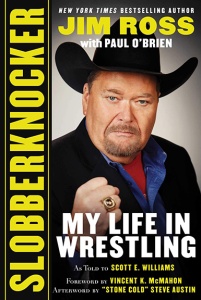 Man, this was just a damn good read, through and through.

Good Ol’ JR tells us his life story from his youth, to his first gig in the wrestling business and through all the companies he worked for from the ’70s and up until the ’00s.

What makes this so good is that it is very much just Jim Ross talking in his own words. While there are co-authors on the book, these are Ross’ personal stories and they are told with that certain panache that is very much JR. Fans of the man’s work over the years probably understand what I mean by that.

While this is about his own personal journey through life and the wrestling business, it actually gets more intimate and more personal than I was expecting and as a longtime admirer of Jim Ross, it’s really neat getting this close to the guy, as he’s been front and center in my family’s living room for decades.

Everything in this book is interesting, as he had a full life and never seemed to live a dull chapter. But the fact of the matter is, Jim Ross came up with hard work and a burning desire to be a part of the business he fell in love with as a kid. He hustled and shoved his foot through the door with a certain youthful moxie that says a lot about his character and his drive. And ultimately, it paid off for Ross, as he has now spent decades in front of the camera and behind the scenes for massive companies.

I really liked the early sections of the book that dealt with how he eventually won over Cowboy Bill Watts and got to be an important part of Watts’ Mid-South empire. But honestly, the whole book is engaging as hell and sucks you in.

I really took my time with this book, more so than I normally do, as it hooked me early and kept my attention throughout. There isn’t really a low point and it just made me like and respect the man even more.

Rating: 9/10
Pairs well with: JR’s upcoming book Under the Black Hat, as well as other wrestling biographies and books about the business side of things.