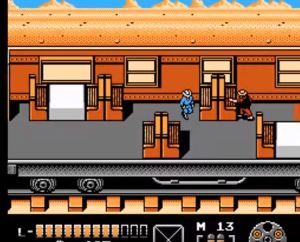 I have never played The Lone Ranger for the original Nintendo but I went into this knowing nothing about the game and without having any expectations.

What I was really surprised to discover is that this is one of the greatest 8-bit action RPGs of all-time!

Seriously, no one talks about this game, I’ve never heard anything about it and because of that, I have to consider it a real hidden gem among the 600+ titles that were released for the system.

The thing that makes this game so great is that it employs multiple gameplay styles from bird’s eye view world traveling to side scrolling, vertical scrolling and first person shooter action levels. You fight in towns, on moving trains, in caves, in forts, in hotels, on mountains, in the desert and even get to fight on horseback in two different ways.

Man, this game is just cool as hell and a shitload of fun! It’s really damn difficult but it isn’t unbeatable. I did beat the game, even though it took some time, and it gave me a real sense of accomplishment unlike many games from the era that have really underwhelming endings. This game’s ending was pretty superb for the time.

There isn’t a dull moment or a boring mission. The game designers did a fantastic job at keeping every area of the game fresh and unique, always adding new twists and ways to play the game.

For the 8-bit era, this is close to a masterpiece. The only things working against it are a lack of maps in the first-person stages and frustrating controls that switch your weapon when you jump.

Rating: 9.5/10
Pairs well with: other action RPGs and western games for the NES.