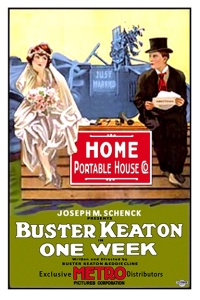 “Now look at the darned thing!” – The Bride

One Week is a fairly early movie in Buster Keaton’s career but I wanted to revisit it, as it is one of my favorites.

It’s actually the first film where he is the star and it also has Sybil Seely playing his wife. She would be featured in other early Keaton films.

As a kid, this was one of my top Keaton films because it’s just really damn good and the physical comedy here is just on another level. Plus, it’s a short film, so it used to pop up on TV early in the morning quite a bit.

The story revolves around two newlyweds that are gifted a “build-it-yourself” portable house. Keaton, as the Groom, does his damnedest at trying to build their new home but he’s terrible at it, which leads to a great series of gags and still, some of the comedian’s best.

Looking at it through a modern lens, it’s impressive for the time. I’m not sure how they were able to pull off some sequences and there are really big things that happen in this that exceed the scope of a typical movie for the time.

For instance, there is a bit where the entire home is spinning as people tumble in and out of it. There is then the big finale, which sees the house get decimated by a real life train. I’m guessing it wasn’t hard to get permits back then.

At the end of the day, this isn’t Keaton’s best film but it is a good example of how far ahead of the competition he was in his first starring role.

Rating: 8/10
Pairs well with: other Buster Keaton films, as well as Charlie Chaplin’s and Harold Lloyd’s.