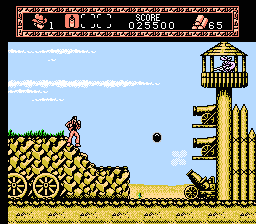 I have never played this game, as it came out at the end of the original Nintendo era and I had moved on to Sega Genesis and Super Nintendo. I probably wouldn’t have appreciated it, anyway, as I was into better graphics, better sound and hadn’t had good experiences with other Indiana Jones games for the NES.

Playing it now, this is the best Indiana Jones game on the NES console. It’s actually kind of fun and it has better controls and overall mechanics than the other games.

Now the controls can still be wonky and frustrating but as bad as the other games were, this is actually a step up.

Additionally, there is more than one gameplay mode. You do the standard side scrolling action stuff but you also get to fly a plane and drive a motorcycle. There are also cool locations. I enjoyed the train level, as you punch and whip your way through baddies on a train moving through the European countryside.

For those familiar with the G.I. Joe games released on the NES, this has a similar gameplay style on most levels.

The game is rather difficult, however, especially some of the later boss battles, as the amount of damage you can take is pretty minimal.

Ultimately, I was pleasantly surprised by the game and, for the most part, like it.