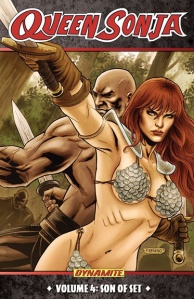 Where the previous installment of the Queen Sonja series felt kind of light and was more of a prequel/Year One type of tale, this moves the story forward in a great way and also serves as a sequel to Red Sonja Vs. Thulsa Doom, as Doom is resurrected by an ancient force claiming to be the god Set.

All the Thulsa stuff here is pretty great for fans of the character. Also, everything with Set has very strong Lovecraftian vibes and it draws comparisons to the old Robert E. Howard stories that kind of tied to Lovecraft’s mythos, as the two writers were very close friends and it’s been said that it’s possible that the original Conan, Kull and Red Sonya stories happen in the same universe as Lovecraft’s.

The story was the second strongest of the Queen Sonja series thus far, following the second volume. I liked the action, the stakes and how Sonja overcame adversity and was able to further develop into a real leader, able to rally her kingdom behind her, even when it’s all in complete disarray.

My only complaint about the story is that the faux Set and Thulsa Doom sort of have their own battle and we didn’t get the satisfaction of seeing Sonja really fight either of them. But the ending, regardless of that payoff, was still good and it makes sense for the story. I just wanted to see Sonja and Doom get into a physical confrontation once again.

Overall, this was some good shit, especially for fans of Howard lore, Lovecraftian lore and simple yet badass sword and sorcery tales.