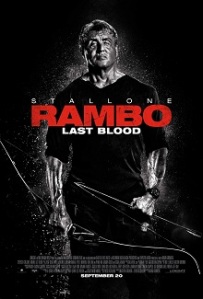 I may be four months late to the party but I finally got around to seeing Rambo V or, as it is officially called, Rambo: Last Blood.

Getting straight to the heart of it, this is the worst Rambo film. That doesn’t mean it is bad, though, as I still really enjoyed it and it’s better than most other modern action films.

The last fifteen or twenty minutes of the movie are incredible for fans of hardcore ’80s style action. It’s an all out war between Rambo and piece of shit sex traffickers on Rambo’s farm.

The first two acts of the film are a bit weak, however. They don’t feature that much action, really, except for a few scenes of Rambo just beating up some thugs. This picture certainly doesn’t have the level of action as 2008’s, far superior, Rambo.

I think part of the problem is that this movie is too short. It’s less than 90 minutes and if you lob the credits off the film, it’s only about 80 minutes. Now there is a longer international cut that comes in at 101 minutes. I’d assume that this is a better cut of the film and maybe the US version had its violence and action toned down due to the overly bitchified political and social climate of 2019. I mean, this is a movie about a white dude killing off a fuck ton of Mexicans. It doesn’t matter that these people are the scumfucks of the Earth, the Hollywood elites would rather the races be reversed in movies like this now.

That being said, the villains in this are so evil that I don’t feel like the end was satisfying enough. After what these men did to Rambo’s surrogate daughter, his friend’s sister and well, to Rambo himself, I was really hoping for levels of violence and gore on par with the 2008 film.

The big finale is still great, as Rambo lures the scumfucks into his underground maze where he picks them off one-by-one like a silent predator. The murder of the gang leader at the very end is pretty intense and violent but I feel like that piece of shit got off too easily. But maybe this is a sign that Rambo is older and he just wants these men dead, as opposed to playing with them like a cat slowly torturing a mouse.

Like other Rambo movies, this one comes with a message. This time, the film’s message is about how fucked up the cartels are in Mexico between sex trafficking, kidnapping, drugs, etc.

I guess one big difference between this and the 2008 chapter, is that I didn’t leave this one wanting more. The ending is sort of ambiguous, as Rambo may or may not bleed out and die. I think it was left that way to keep the door open for Rambo VI. I don’t think it’s necessary though and now, I don’t think that this movie was necessary either.

The fourth film had a pretty perfect ending and went out on a really high note. This fifth film, while mostly okay, felt like that family member that stuck around a day or two too long after the rest of the family left following the holidays.