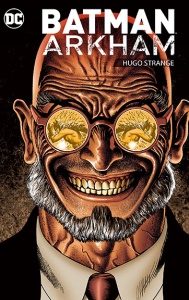 There really aren’t a lot of Hugo Strange stories. Well, at least when compared to the amount of Joker, Riddler, Two-Face, Penguin or Catwoman stories. But there were still enough to fill up an installment in the Batman Arkham Collections, which has been a trade paperback “best of” series for many of Batman’s top villains.

Granted, we might be scraping the bottom of the barrel now that they’ve done one for Joker’s Daughter and they have an upcoming one for Victor Zsasz but I digress.

I like most of these villain-centric collections and this one is no different, as it is nice to have the key Hugo Strange stories in one book. However, this also goes to show that the guy has been underutilized and underappreciated by Batman writers over the years.

This is over 200 pages but some of the stories are multi-part arcs. There’s maybe a half dozen different tales here but it doesn’t feel like it’s enough when compared to Batman Arkham Collections of the past.

Most of them were enjoyable but this makes me question as to whether they should have made this one.

It also made me wish that a good writer would come along and use Hugo Strange more or at least come up with something really great for him to do. He was utilized greatly in the Arkham Asylum games, as well as the Gotham TV show.

But maybe he’s just too much of a generic mad scientist type and with that, overloaded with tropes that most writers just aren’t interested in writing about. But the character debuted in 1940. So in 80 years, there really hasn’t been one great Hugo Strange story? C’mon, DC.