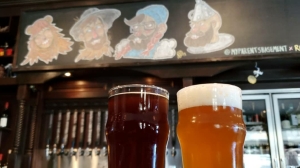 On the eve of the Fourth of July, I’ve already been freely handed a few beers by a few different people. I’ve had to decline because ultimately, I am a prick and an asshole. More correctly, I am a beer snob.

Sorry, amateurs. Even in the spirit of camaraderie, I just can’t get myself to physically touch a Coors Light, Bud Light, Mic Ultra or any other low calorie Yankee swill that broke ass dude bros chug while pretending they know something about soccer. Sorry, I’m also frustrated with the know-nothing World Cup cheerleaders who just so happen to be in every bar I’ve walked into in the last two weeks. Maybe I’ll write about that next.

Moving on, there is so much beer in the world. There are so many varieties, types and different nations with beer-making expertise. Even if you’re broke as shit, there is still affordable stuff out there. But these guys don’t want to experience anything new. They’re boring-as-fuck individuals that live boring-as-fuck lives and can’t stray too far from the norm because they’re way too comfortable being mediocre. They want their turkey sandwich for lunch everyday, they only fuck missionary style and they are more than content in a collared shirt and khakis picked out by their girlfriend. She’s boring-as-fuck too. She always wears capris and plain unflattering t-shirts. She took her hair out of a ponytail once but that was just because she had to change out her Stephanie Tanner scrunchie.

I don’t hate you people, I just hate your boringness. I hate that you are perfectly fine doing the same fucking thing everyday… for the rest of your lives. I don’t hate Budweiser but I hate the fact that it is goddamned Coca-Cola and it is the automatic default thing for “beer drinkers” to grab because it is the most recognizable. I hate that assholes drink up light beer while eating two dozen buffalo wings. It is a light beer because it is lower in calories. If that’s why you drink it, good for you – this may also make you a chick. But to those of you pounding a case of Bud Light every night while stuffing your face with fatty foods are ignorant fucking assholes. Ignorant fucking assholes with no taste buds, apparently.

Yeah, I’ll drink this shit too on occasion. For instance, one time I was doing manual labor in the Nevada desert and I was dying from the heat, was super parched and felt like I was going to collapse. A friend tossed me a Miller Lite. I popped that motherfucker open and it was the best goddamned thing I have ever drank. It serves a purpose: survival. Also, I’ll grab one of these American flagship beers when I’m at a baseball game and the vendor walks by because I’m too caught up in the game and too lazy to walk all the way to concessions to wait in a long ass line.

To all you hardcore IPA-drinking snobs jumping and cheering at my words, you guys can go fuck yourselves too. Don’t get me wrong, I love a good IPA but it isn’t the only thing out there. Also, many IPAs, by “many” I mean most of them, are way too hoppy. Yes, I also love hops but when it is so extreme that the beer becomes some bitter piece of floral shit, you can throw it in the goddamned dumpster for all I care. In the IPA department, I’m really enjoying Cigar City’s stuff right now: Jai Alai and Invasion to be specific.

Look, life is short. My point is, buy something besides the same crap. Expand your palate and your life experiences. The same goes for you goddamned Johnny Walker, Jameson, Jim and Jack drinkers. Stay away from the 4J’s and try some other whiskies.

Tomorrow is the Fourth of July. Celebrate your freedom by being free to choose something else in life.

And fuck your turkey sandwich.