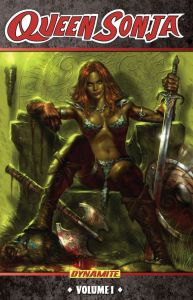 Marvel had quite a bit of success with Conan the Barbarian and Red Sonja in the ’70s and ’80s. Back then, Conan got to star in a spinoff series that saw him become king. That was appropriately called King Conan. Well, I guess Dynamite Entertainment in 2010 thought that Red Sonja deserved a similar accolade, as they debuted Queen Sonja, a series that ran for quite awhile.

I’ve never picked up any of these but being a longtime Red Sonja reader, I thought I’d give the series a shot.

Overall, I enjoyed this for the most part.

The story, here, is mostly about how Sonja conquered an evil dictatorship of slavers and freed a kingdom. With that, she is appointed their queen and sets forth to protect them from whatever challenges may arise in the future. That obviously leads to series into a lot of potentially cool scenarios for the future.

I thought the story was better than decent but not great. It’s entertaining with a lot of action but it felt kind of simple. Not that that’s a bad thing but it could’ve used a bit more narrative flourish.

My only real hiccup about this though was the art. It’s fairly competent but it’s not particularly good and it’s kind of inconsistent in parts. But I think that the real distraction came more from the colors, which just felt like simple and quick airbrushing. The interiors are nowhere near as good as the superb cover.

Still, that’s not enough to make me walk away and I’d like to see this series turn into something solid. So I am going to at least read the second volume in the near future.