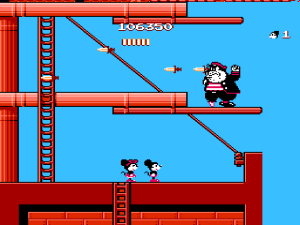 I used to play this a lot, as a kid. However, it’s not as good as I remembered it being, especially when compared to the other games Capcom made for Disney properties in this era. This is one of the earlier ones though and I guess it paved the way for the better games that followed.

This is a decent platformer for the most part. It’s just kind of short and overly difficult not because it was meant to be hard but because it had some shoddy design and mechanics.

Some of the boss battles are made to overwhelm you and there really isn’t a way to block or dodge a constant barrage of attacks. You just kind of need to have full life, take damage and hope for the best.

Also, some levels are overly complicated. I remember having problems with the woods level, as there are hidden doors you have no idea are there and you have to access them to advance. When I was a kid, after hours of frustration, I found one of the doors by mistake. I remembered that and that’s the main reason I was able to beat the game this time.

None of the bosses are particularly interesting or fun to fight but you do get to fight Pete from the classic Steamboat Willie cartoon, as well as Maleficent, even though she has an incredibly oversized head and looks more like a Funko Pop than a badass sorceress.

Mickey Mousecapade hasn’t aged well but it’s kind of fun, even if it is frustrating.