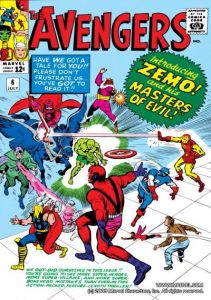 Granted, the comic I own is graded and slabbed, so I read this digitally. It’s actually free for Comixology Unlimited members.

I’ve got to say, I enjoyed this issue immensely. Even more so than the Kang issue.

This was a pretty high energy issue that was mostly action, as the Avengers didn’t fight one big villain but instead, fought a group of villains that were very aware of each hero’s weakness.

The story also ties back to the death of Bucky and how personal that tragedy was for Captain America. We learn that Zemo was behind Bucky’s death and that gives some added emotional weight to the story, cementing him, immediately, as one of Cap’s greatest rivals.

I loved Stan Lee’s writing here, especially his dialogue. I also appreciated the extra layers added to the plot that called back to past events that existed before Stan was even writing comics.

This is, of course, all enhanced by the stupendous artwork of Jack Kirby, who is still my favorite person ever to draw Captain America. He also really gives Zemo a presence and style that no one else has been able to replicate with the same sort of impact.

For those of you that just like old school comics when stories were told over just one issue, this is a great representation of that bygone narrative style.