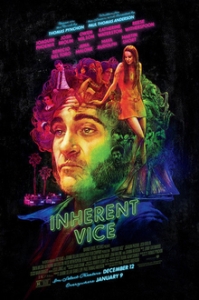 I had really high hopes for this film.

It’s directed by Paul Thomas Anderson, who everyone, even their pets, loves. It stars Joaquin Phoenix, Josh Brolin and a superb supporting cast. And, well, it’s a neo-noir set in the early ’70s that looked damn cool from the trailers.

Sadly, this was duller than an unsharpened pencil.

I kind of hate that I didn’t dig this but it was really hard for me not to nod off through almost every really long, drawn out scene. Frankly, the film didn’t even need to be two hours, let alone 148 minutes.

Visually, the film is stunning. Every scene and every shot looks pristine and perfect. But that’s not enough to carry a movie. I can see cinematography of the highest caliber in television commercials and music videos.

The thing is, the narrative needs to be as exciting as the visual allure. It needs to capture you, hold on and at least try to leave you breathless until the final frame.

I watched this movie and was so disinterested in it that I couldn’t remember what the film was about, where it needed to go or why Phoenix was investigating things. I felt like my mind was as numb and disoriented as the majority of the characters in the picture.

If you like movies solely for visuals and great soundtracks, than this may be your bag.

It wasn’t mine though.

Rating: 5/10
Pairs well with: mind numbing drugs and a case of cheap whiskey while watching a Hypercolor t-shirt cook in the microwave.