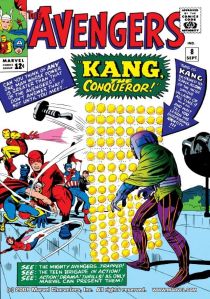 This is one of the comic books that is pretty high up on my bucket list. I still don’t own it but I wanted to read the story, so I bought a digital copy on Comixology for under two bucks.

For the most part, this was a cool read. It had that great Stan Lee style to the action and dialogue and it featured art from my favorite artist of all-time: Jack Kirby.

While this isn’t the start of a big multi-part story, a lot happens in these 22 pages and you get a real sense of who Kang is and what he is capable of. It is a pretty solid Lee/Kirby era intro to one of their greatest villainous creations.

I wouldn’t consider this a must read but it will probably be enjoyed in an old Avengers collection alongside other stories from the time.

I personally love Kang, though, so I probably enjoyed this more than the average bear.