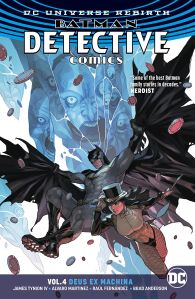 I mostly enjoy James Tynion’s writing. He does a pretty good job with this series, even if it isn’t wholly my cup of tea because I’m not a fan of large Bat-Family groups. I like Batman working solo or with one or two other close allies.

But I still like Tynion’s run on Detective Comics enough to keep reading it, so there’s that.

I think I am mostly drawn in to the Clayface stuff because I actually like seeing him trying to redeem himself and work on the right side of the law.

While Clayface isn’t the focal point here, though, we do get to dive deeper into Azrael’s world. Now he’s a character I have a love/hate relationship with. But in this series, so far, I mostly like him and this chapter wasn’t any different.

This also puts some focus on Zatanna, who I was happy to see pop up, even for one volume. More importantly, this gives us some good backstory to her and Batman’s relationship, going back to their teen years when Bruce was trying to train under her father.

Overall, this was a quick, energetic read that added some new things to the plot and also served to strengthen the bond between this team of characters.

Most importantly, this brought Stephanie Brown a.k.a. the Spoiler back while also dropping hints that Tim Drake a.k.a. Red Robin was possibly still alive.

In the end, I like where this volume went and it ended in a way that makes me want to see what happens next.