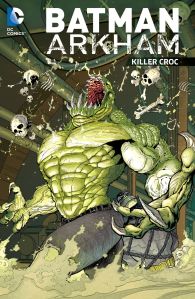 Killer Croc is a Batman villain that I have dug since I first read a story with him in it in the late ’80s. I’m glad that he has had staying power and is now pretty close to being an B+ level villain in the Batman and larger DC mythos.

This collection, like the other Batman Arkham villain compilations features a dozen or so stories focused on this specific character, all from different eras with a slew of different writers and artists.

But in the case of this book, that kind of hurts the overall compilation.

Now most of the writing is good with stories by Chuck Dixon, Doug Moench, Gerry Conway, Tim Seeley and others. It’s the big style variance in art that damages the overall presentation.

The problem is that most of the stories featured here are from the ’90s. At the time, DC Comics had a lot of artists that experimented with a lot of different art styles. Most of the stuff here looks like ’90s indie stuff that is trying way too hard to be edgy and extreme. A lot of it comes off like massive eye sores and the strong contrast in style from chapter to chapter is kind of jarring. But this is a compilation and these things happen when you’re wedging a dozen or so stories into the same book.

However, this collection also brings to light one of my biggest gripes about the Killer Croc character and that’s that everyone draws him differently. Sometimes he’s just a jacked dude with scaly skin and other times he’s the size of the Hulk with an actual crocodile looking head, snout and all. I’ve never been a fan of his inconsistent look and some of these artists go too wild with it.

Being mostly a product of the ’90s we also get some over the top violence in one story in particular, which sees Killer Croc literally chomp a woman in half. While that stuff doesn’t bother me, it seemed out of place in the book and just reminded me of a time when DC Comics seemed like they were trying too hard to fit within what they thought were the times.

I did enjoy this collection, despite my gripes about it. They could only work with what they had in their library but I can’t believe that some of these are considered the best Killer Croc tales. Maybe someone needs to step up and do the character some justice, treat him with care and give us something with more meat.

I also found it odd that none of his Suicide Squad stuff was here, as some of those stories really build up the character in interesting ways.