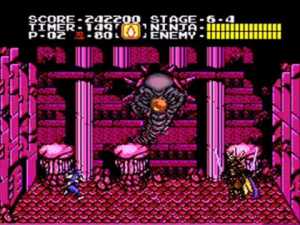 I loved Ninja Gaiden back in the ’80s.

But playing it again now, the first time in quite some time, I realized that my love of the game is more about the story and the incredible cut scenes that were, at the time, better than just about anything presented in the 8-bit NES format.

I love the world, the mythos and was so captivated by it that I used to draw my own Ninja Gaiden comics. But this was also during the ’80s when cultural ninja mania was at an all-time high, especially in the minds of elementary school aged boys.

The gameplay itself is pretty shitty. And I remembered how frustrating this game was. When I was a kid, I dealt with it and pushed through because the story was just so badass. As an adult, I had to push through because I wanted to properly review it and because I had the benefit of playing it on an emulator with save states and with a few game genie codes activated.

But man, even for cheaters like myself, this is still a hell of a bitch to get through. The game physics are terrible, if I’m being honest. Some of these physics would be tweaked and improved upon in the sequel but you get so overwhelmed by monsters that you often times get knocked out of the air, mid-jump, or knocked off of pillars and platforms.

Also, none of the boss battles are very fun. They’re mostly frustrating, don’t require much strategy other than not getting hit and they aren’t something you even look forward to, which is a failure in game design and player engagement.

These games were made to be damn near impossible to beat. While I did beat this one without cheating, as a kid, it probably would’ve made me start drinking if my mum actually kept real booze in the house.

But complaints and frustration aside, the story and cut scenes are still fucking cool, even in 2019.

Rating: 5.75/10
Pairs well with: all the other Ninja Gaiden games for the NES.