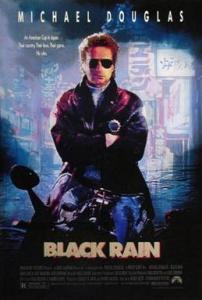 “I usually get kissed before I get fucked.” – Nick Conklin

Ridley Scott has done some great films. While Black Rain isn’t often times in the discussion of Scott’s best works, it is one of his best looking motion pictures.

Being that this is pretty much neo-noir, it shares a lot of the same visual style as Blade Runner. However, instead of seeing a futuristic Los Angeles on the screen, we are given modern day Osaka. Or what was modern day in 1989.

Sure, this doesn’t have Replicants and flying cars but it does show us how late ’80s metropolitan Japan wasn’t too far off from Scott’s vision of the future.

The story follows two cops played by Michael Douglas, in maybe his coolest role, and Andy Garcia. They witness a Yakuza hit in New York City, capture the criminal and then have to escort him to Japan, where he escapes and they then have to work with the Osaka police in an effort to catch him and bring him back in.

What the cops soon find out, once their stay in Japan is extended, is that the Yakuza guy they caught is in a massive gang war. Now these two find themselves in the middle of it all while the local Osaka police are slow to act due to their hands being tied by their strict laws.

This is also like two buddy cop films in one, as Douglas’ Nick Conklin works with his New York partner for the first half and then has to work with his assigned Japanese partner for the remainder of the film. But unlike your typical buddy cop formula, we’ve got two guys from very different cultures, clashing but ultimately finding respect for one another. It’s kind of like what we would get with the Rush Hour movies nine years later and with less comedy and more testosterone.

The thing that I really like about this flick is not only the clash of cultural styles but the mixing of genres. You’ve basically got a neo-noir Yakuza biker movie. It also has a pretty hard edge to it and is unapologetic about its violence and what modern critics would deem “toxic masculinity”.

Black Rain is a cool fucking movie, hands down. While it is sort of a Yakuza movie seen through Western eyes and made for that audience, it really isn’t too dissimilar from the best films that genre has to offer. Ridley Scott doesn’t specifically try to replicate Japanese gangster cinema, so much as he just tries to make a film within his own style that just happens to take place primarily in Osaka. And frankly, it all seems to fit pretty well together.

Unfortunately, Scott had issues filming in Japan due to the budget. He actually had to shoot the big finale back in California. I really would have loved to have seen a sequel but I’m assuming that Nick Conklin only got one outing because of the financial strain of going back to Japan for another movie.

Then again, Scott didn’t really have much interest in sequels to his films until more recently. So maybe we can get Black Rain 2? Assuming Michael Douglas can still go at 75 years-old. But hey, Sylvester Stallone is bringing Marion Cobretti back, so why not?

Rating: 8/10
Pairs well with: Blade Runner, Someone to Watch Over Me, Rising Sun and ’80s neo-noir.