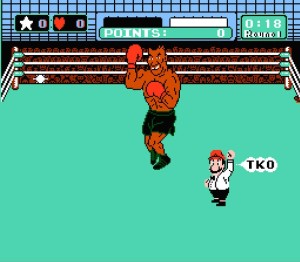 I think that Mike Tyson’s Punch-Out!! is still my favorite sports video game of all-time. Sure, it’s not realistic but it didn’t just give me hours of fun, it gave me decades of fun.

Hell, I still play through the game every couple of months and about a dozen years ago a friend and I made a short film where this game was the centerpiece of the plot.

Someone once asked what my favorite Mario game was and I answered, “Mike Tyson’s Punch-Out!!”

But let me reel it back in.

This game is one of the greatest time wasters ever invented. That’s not hyperbole, that’s how I really feel.

You see, it’s pretty limited. You just do one thing in the game, you box. However, each boxer you face has a different style and it’s really a game about timing and pattern recognition. Now you may think that’s easy when a boxer you’ve beat shows up a second time but the patterns you familiarized yourself with change and get more difficult later in the game.

The way this was designed was pretty brilliant. It is also addictive as even in 2019, 32 years later, it’s hard to put down once you fire up a game.

I still play through this game in its entirety a few times per year. That’s staying power.

My only real complaint about the game is that Mike Tyson is ungodly hard. Yes, I can beat him on a regular basis but, as a kid, it took me a long ass time to finally take him out. Truthfully, even if you’ve beaten him dozens of times, as I now have, he’s still a beast and one mistake is pretty much your defeat.

A few years later, Mike Tyson got into some trouble, so he was removed from the game and replaced with a fictional boxer named Mr. Dream. Honestly, Mr. Dream was just a whitewashed Mike Tyson. Play both versions of the game and you’ll see what I mean.

In the end, both NES Punch-Out!! games are the same game. Just one has Mike Tyson and the other has whitewashed Mike Tyson.