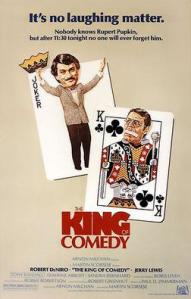 “Better to be king for a night than schmuck for a lifetime.” – Rupert Pupkin

From the opening scene and into the unique credits sequence, this movie kind of just sucks you in. You’re pulled into a zany world where your primary companions are two nutcases played by the legendary Robert De Niro and the vastly underrated Sandra Bernhard.

De Niro plays Rupert Pupkin a stand-up comic that wants the fame that his idol Jerry Langford has. He obsesses over the famous late night television host, tries to get him to listen to his material, stalks him incessantly and eventually, abducts him in exchange for an opening monologue spot on his show. Pupkin succeeds and even if you kind of know he will, to some extent, it’s the journey from point A to point B that makes the story so engaging.

In a lot of ways, this has some similarities to another Scorsese and De Niro collaboration: Taxi Driver. I guess that is why both movies are being heavily borrowed from for the upcoming Joker movie.

Both films follow a man losing himself within New York City. Both men also go to extremes by the end of the film. Neither are really good men but it’s hard not to cheer for them at the same time.

While this is not the near masterpiece that Taxi Driver was, it’s still a visually stunning and dramatic film that is boosted by its onscreen talent.

I’ve never been a fan of Jerry Lewis’ style of comedy but seeing him get to be dramatic and play his role more like a straight man than a buffoon was really damn cool. Also, Lewis is a talented guy, even if his comedy doesn’t resonate with me. The guy is a legend for a reason and seeing him basically play a fictionalized version of himself, here, was refreshing and he certainly impressed me.

I think the real scene stealer though is Sandra Bernhard. Man, she is so damn good in this and she plays crazy well. She’s mostly an obsessed groupie but you can sympathize with her. And a lot of that is due to the writing and the direction of Scorsese but I don’t know who else could’ve pulled her character off with the right sort of personality and tone that Bernhard has.

Initially, when this film came out, it bombed pretty hard. And even though it has built up a good reputation in the years since, it isn’t one of Scorsese’s best. It is still a very good film, though, and I don’t think that it should be overlooked for those trying to experience more of Scorsese’s older oeuvre. It has similarities to his other early works and feels like a natural extension of them. It certainly taps into the same sort of ’70s (and into the early ’80s) New York City vibe that his films from this era had.

Plus, the performances in this really make it worth your while.