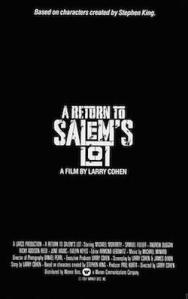 This is really just Salem’s Lot in name only. Technically it’s not officially listed as being based off of Stephen King’s novel and that’s probably for good reason.

I like some of Larry Cohen’s movies. He’s a guy that makes schlock but some of his schlock has become iconic over the years, such as The Stuff, Black Caesar and It’s Alive. This is not Grade A Cohen schlock, however.

In fact, I’m not sure Cohen even watched the first Salem’s Lot movie or even read the book.

The story features Cohen regular Michael Moriarty, as he and his dimwitted, douchebag son travel to the town of Salem’s Lot to fix up his childhood home. However, the town and its residents are vastly different than the previous film.

Actually, the vampires are different too, as this doesn’t feature the Nosferatu-like Kurt Barlow or any vampire resembling him. These vampires are just senior citizens with plastic Halloween fangs. Also, the whole town is pretty much all vampires, except for the few human familiars that keep a few shops and the gas station running, in order to keep up appearances to outsiders passing through.

We also get an old Nazi hunter that is now a vampire hunter and there are all these strange parallels between the Nazis and vampires and it all ends with the boss vampire getting impaled by an American flag instead of a stake. I don’t know how a pissy twelve year-old could ram an entire flagpole through a vampire’s back but this film is so heavy handed that maybe it gave the kid an off screen shove.

This movie is mind-numbingly bad. It’s incompetent on every level, it isn’t remotely scary and in fact, it set vampires back fifty years in cinema.