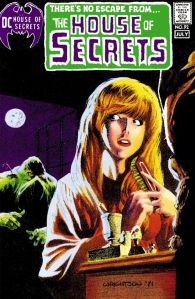 While this issue is mostly widely known because it is the first appearance of Swamp Thing, I can’t review it just based on that story. This is an anthology comic and I have to review this issue as one body of work.

That being said, the Swamp Thing story was far and away better than the other chapters in this. But I’m also not a big anthology fan, as I’ve stated many times. And this issue is an example of why I’m not big on anthologies, as it features one great story while the rest fall well below the mark of this issue’s only memorable tale.

However, these old school ’70s horror comics still resonate with me and luckily, the Swamp Thing story resonated enough with other people that the character would go on to survive for decades and even get multiple films and television series.

I think the reason it really had the lasting power it did was due to the artwork of Bernie Wrightson. The art is spectacular but I also have to give credit to Len Wein’s writing. But when you put two superb talents like this together, magic often times happens, as is the case with this character and his first story.

For fans of Swamp Thing, it is really worth going back and checking this out. Luckily for all of us, DC just released a facsimile edition. But you can also read it digitally on Comixology for just a few bucks.

Rating: 7/10
Pairs well with: other early Swamp Thing stories, as well as other issues of The House of Secrets anthology comic.