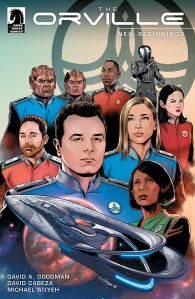 Out the gate, this isn’t a great comic but it’s a pretty enjoyable one that captures the tone, humor and humanity of the television show pretty well. And honestly, I hope that this is just the start of more comics and possibly books, toys and other products tied into The Orville.

This first story arc was a two-parter and it reads like it’s the length and pace of a regular hour long episode. This is a small, simple story but it does a good job of bringing these already beloved characters into a new medium.

I dug the artwork and all the characters’ likenesses were good. Additionally, it just felt like a real extension of the show and didn’t get bogged down by the artist trying to stamp their own style on the book.

The story takes place around the beginning of season two, between some episodes. I think that the comic may have stated where it took place exactly but I don’t recall from my shitty memory.

In any event, I like that this exists within the television show continuity and isn’t some alternate timeline or new take on the franchise. Yes, I said “franchise”. Because with a comic and some other things in the works, this is more than just a simple television show. It’s kind of becoming a mini phenomenon even if it has left Fox and is taking a year off to prepare for its move to Hulu.