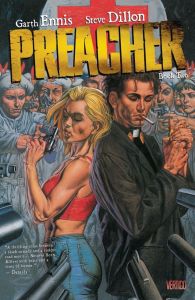 A big chunk of this book in the Preacher series is the Crusaders story arc, which I already reviewed here. It takes up six issues of the fourteen collected in this volume but I wanted to also review this book as a whole body of work, as I am reading through Preacher in its entirety and in order.

Man, I fucking loved this book in the series and it would actually have been perfect, except for three of the issues that served as flashback/origin stories for Jesse’s dad and Cassidy. Now those stories are important but they kind of slowed things down a bit.

I guess reading this from month to month, the backstory issues were fine but it kind of gets in the way of the larger, more energetic story for the main characters. And I think that the main plot threads in this were just so damn good that even though the origin tales added context and depth, they just had a negative effect on the overall momentum.

This book is pretty important to the larger Preacher mythos, as this is where we meet supervillain Herr Starr, as well as learn all about The Grail and what their purpose is. For those that watch the television show, the events here sort of line up with the end of season three and the start of season four.

But the comic book and the TV show are very different. While they follow similar threads and have similar themes, the comic is way more over the top and intense than the show. In fact, until really reading this from the beginning, I guess I didn’t understand the depths that the comic would go, even for ’90s edgy boi shit.

While the first installment to the series was damn good, this one is close to perfect for what this story is and for Ennis’ style as a writer. I hope that momentum continues going forward as I don’t want to waste too much time before jumping into the third book.

Rating: 9.75/10
Pairs well with: the other Preacher stuff, as well as ’90s Spawn and Garth Ennis’ run on Shadowman.