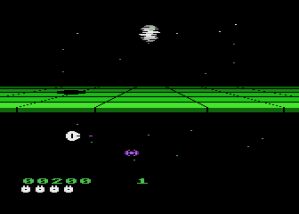 I did not expect to enjoy this game as much as I did. I mean, let’s be honest, most Atari 2600 games are pretty crappy by 2019 standards. Mainly because they are so primitive and simplistic that it isn’t immediately clear what you need to do in a game.

But for the era, this is pretty solid.

It’s also a bit advanced, as it has two stages to it.

The first stage sees you, in the Millennium Falcon, battle it out with TIE Fighters and Imperial Shuttles while waiting for a hole to appear in an energy shield.

The second stage sees you come face to face with the second Death Star, where you have to dodge the Death Star laser and other Imperial attacks while blasting your way through sections of the Death Star until you hit the reactor core.

Once you do these two things, you watch the second Death Star explode and have to dodge the debris.

After that, the game just cycles through, round after round with each a bit more difficult than the rest.

Like almost every classic Atari game, you work you way through a scenario and then it’s just wash, rinse, repeat. That’s not going to hold a modern gamer’s attention for very long but at least this game gives you a tiered scenario instead of just one repetitive thing.

In the end, I can’t knock the game and I had fun with it for twenty minutes or so.