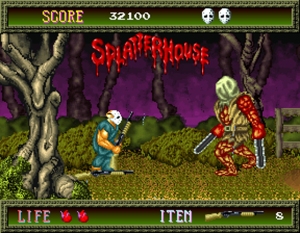 Splatterhouse was one of those games I used to see in all the gaming magazines of the late ’80s. However, no one I knew had a TurboGrafx-16, so I never got to play it.

Anyway, the game was always highly touted but I think that was because of the gore factor, as video games didn’t have a lot of blood and splatter back then.

Having played it now, it was fun enough but nothing fantastic.

The TurboGrafx-16 runs and plays really smooth but I thought the controls were a bit wonky.

Also, the main character feels a bit large and chunky compared to what was the norm at the time. This feels like it’s scaled for a handheld console even though it wasn’t. Although, it probably looked good on the handheld Turbo Express.

I thought that the level design was pretty mediocre and while some of it looks cool, it’s just repetitive side scrolling fare. Plus, many obstacles were hard to avoid, especially while being overwhelmed by other enemies. Also, since this doesn’t play arcade style, where one can just continue off from where they die, it makes advancing difficult without a lot of experience.

Frankly, I don’t want to play this long enough to get that experienced.

Additionally, the boss battles I did play were confusing and disorienting. It wasn’t clear what you were supposed to do in some cases.

If I can get my hands on the sequels, I’ll check them out and give them a playthrough too. Maybe they improved on some of this game’s faults.

Rating: 6/10
Pairs well with: the sequels in this series, as well as other TurboGrafx-16 games and arcade beat’em ups.