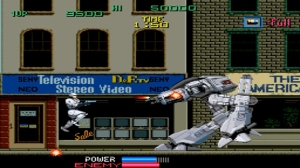 I used to love the hell out of this game whenever I’d see its cabinet glowing in the corner of my local arcade. I used to pump quarters into this thing like an old lady at a slot machine in Circus Circus. But I remember dropping serious coin and never being able to get very far.

Now that I can run this on MAME, I have infinite quarters, so I wanted to revisit it and play it all the way through.

I’ve got to say, this game is a beast. And I don’t mean that complimentary. Maybe there is a difficulty setting I can alter on MAME but you get overwhelmed by enemies and killed pretty damn quickly. It’s amazing how quick you get overwhelmed and really early in the game. Sure, I can keep continuing and I did but you only get one life and the continue screen freezes the gameplay action, bogging down the gameplay flow and your momentum. It’s kind of tedious, actually.

And hell, it’s been nearly three decade since I’ve played this and I could just suck really bad at it. But this era of arcade games are my cup of tea and I’m a pretty good player in most cases.

I still love the graphics and the game runs smooth as hell. The real high point is the music and the sound effects, which are top notch for this game’s generation.

It could have gotten more creative with boss battles, as you fight ED-209s a half dozen times and even fight two at the same time towards the end.

This isn’t too dissimilar from the Nintendo RoboCop game but it is harder and the levels feel more repetitious than its NES counterpart. For instance, for those familiar with the NES game, the City Hall level isn’t in this version.

All in all, this was fun to revisit but it’s insane difficulty made it a chore after the first ten minutes.

Rating: 6.75/10
Pairs well with: other side scrolling shooters from the era.