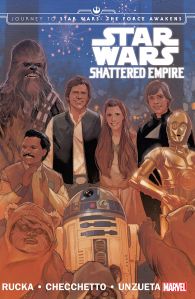 This came out just before the first Disney Star Wars movie, The Force Awakens. It was meant to bridge the gap between Return of the Jedi and the new sequel trilogy.

It’s a complete failure of storytelling though.

Does it bridge the gap? Sort of, I guess.

The story follows the events of the Battle of Endor but focuses on Poe Dameron’s mom, a character we’ve never heard of but is suddenly a hero known by everyone, even Luke Skywalker who basically bows before her presence, alerting us of a character propped up as an infallible Mary Sue. And I hate having to go there but Mama Dameron is the exact definition of a Mary Sue character.

Then she goes on an adventure with Leia to Naboo and they meet the current Queen of Naboo. Then there are only three starfighters, so these three women, two of which are fucking royalty, take off into space to fight a fleet of Imperial Star Destroyers all on their own.

This is heavy handed girl power nonsense and a blight on Star Wars, which is why I don’t consider this Disney bullshit to be canon. It’s not that having strong, heroic women is the problem, it’s that they’re thrown into situations that are nonsensical and pointless other than making some sort of social or political statement.

Frankly, Star Wars: Shattered Empire is a prime example of why modern Marvel has been so widely criticized. I like to give each comic a fair shot and look at them as individual bodies of work judged on their own merits but this comic makes it pretty damn clear why the mainstream comic book industry is shrinking and has nealt lost its entire audience.

This was absolute horseshit.

But the art was really good, to be fair.

Rating: 2.5/10
Pairs well with: I guess the other recent Marvel Star Wars comics and the Disney sequel films.