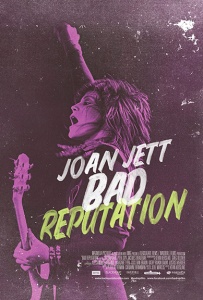 Joan Jett is awesome. If you disagree, you have horrible taste.

Now that that’s out of the way, I was glad to come across this documentary about her life and career. Because, frankly, outside of just enjoying her music whether with the Runaways or with the Blackhearts, I never knew much about her.

As a biographical music documentary, this is pretty standard fare. It goes into her personal life, her backstory and then talks about all the major points in her career.

It’s a well produced and edited piece though and it’s Joan, herself, that gives this thing its life. She’s just great to listen to and her passion comes through.

Additionally, there are a lot of talking head interviews with a slew of famous fans and other musicians. This had a good, solid cast of people with their own unique takes and stories about Joan.

This is definitely one of the more enjoyable rock and roll documentaries to come out in the last few years. The production quality is great, there isn’t a dull moment and it was a fantastic way to kill time on a cramped, cross country flight.