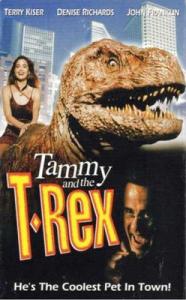 “Oh, Michael what have they done to you?” – Tammy

So I heard that there is an R-rated “gore cut” of this film being released later this year. I guess the version that was shown in Asia was much gorier but the US video release of the film is severely toned down.

Regardless, I wanted to check this film out in its regular US version, as it’s a cult classic but incredibly obscure. On a side note, for those who want to watch this, it is on YouTube, at the moment.

This is a goofy, over the top and ridiculous film. But it’s also a hell of a lot of fun and it works for what it is.

The average person would probably watch five minutes of this and turn it off, deeming it shit. But it’s that special kind of shit that if you stare at it long enough, it blasts you in the face with colorful, enjoyable and overwhelming insanity.

It’s endearing and charming in spite of its immense flaws. It will resonate with those of us who have a love for films like Mac and Me (the same director), The Room and Troll 2.

The premise is batshit crazy. A mad scientist played by Bernie from Weekend at Bernie’s takes the brain of Paul Walker and puts it inside of a mechanical dinosaur. No, not a real dinosaur… but a mechanical one like the full scale animatronic T-Rex robots that you’d see in shopping malls or seasonal science attractions in the ’90s.

The film also stars Denise Richards, who in her prime, was the hottest girl I had ever seen. Especially, through my teenage eyes in the ’90s. Plus, she was really charming and sweet in this and it’s damn near impossible to not get pulled in by her. I also really enjoyed her gay friend in this, as he was f’n hilarious in every scene.

Tammy and the T-Rex is a film that is sort of perfect as a bad movie that’s so bad it’s great.

My only real complaint about it is the butchered editing. But I blame that on the complete exclusion of the gore that the film intended to show. So hopefully, the soon to be released “gore cut” fixes those issues. And honestly, the inclusion of the gore may take this film to the next level and vastly improve upon it.

Rating: 6.5/10
Pairs well with: other Stewart Raffill movies: Mac and Me, The Ice Pirates, etc.