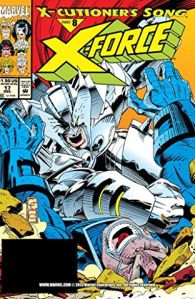 This was one of my favorite big crossover events when I was really just getting deep into comics. This blew my middle school mind at the time and it had a lot of influence over my creative output in the comic book medium.

I was worried that revisiting this story would be a big disappointment. A lot of the stuff from this era that I reread now, usually lets me down, as my palate is more discriminatory than it was at thirteen years-old.

I’m happy to say that this was still pretty f’n solid!

In fact, I think it is slightly better than X-Tinction Agenda, which I used to place ahead of this one.

What I really liked about it, is that it features three of my absolute favorite villains: Apocalypse, Mister Sinister and Stryfe. They are all well balanced and they aren’t here to come together in an effort to finally take out the X-Men, X-Factor and X-Force (formerly the New Mutants). Each one of these baddies has their own purpose and agenda within the story and it all just comes together in a really cool way that even sees the X-Men have to turn to Apocalypse in order to stop Stryfe’s chaos.

This is the best big story to come after the epic Chris Claremont run on X-Men. But if I’m being honest and this certainly isn’t a dig at the legendary Claremont, whose work I love, X-Cutioner’s Song was really refreshing and it showed that new blood could liven things up. Granted, Peter David didn’t hang around too long, Scott Lobdell and Fabian Nicieza also moved on to other things, but this was a weirdly perfect storm considering all the changes happening on Marvel’s X-books following Claremont’s departure and many of the top creatives leaving for the newly formed Image Comics.

The art is also top notch, but Brandon Peterson, Andy Kubert, Jae Lee and Greg Capullo are all fantastic and three of those men have become somewhat legendary in their own right.

X-Cutioner’s Song is well crafted, well balanced and it should be a primer on how to write massive crossovers featuring dozens of characters all competing for their moment.