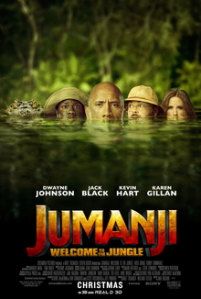 “Why am I wearing this outfit in a jungle? Tiny, little shorts and a leather halter top. I mean, what is this?” – Ruby Roundhouse

I’ve got to say that I was pleasantly surprised by Jumanji: Welcome to the Jungle. I wasn’t sure what to expect from it but it delivered on what it was trying to do, which was being a funny, over the top, action-adventure movie.

The cast was pretty good.

I always like Dwayne Johnson and Karen Gillan, Jack Black is usually enjoyable in most things and Kevin Hart can be grating at times but he does well here, as he isn’t the focal point of the film.

Additionally, I really liked seeing Rhys Darby and Bobby Cannavale in this. I’ve loved Darby since Flight of the Conchords and Cannavale really impressed me when he joined the cast of Mr. Robot.

This is a sequel to the original Robin Williams starring Jumanji but it takes the concept and kind of modernizes it by making it a video game instead of a board game. Here, four teens are sucked into the game and they have to play out the game in a real-life simulation as their avatars, all of which are very different from their real personalities.

It’s a fun, cute movie where the teens are challenged by their situation, their avatars’ roles and having to work together to survive and free themselves from the game. It’s a good coming of age story, even if its pretty predictable and embraces some tropes and cliches.

I thought that the action was solid, the CGI effects were top notch and the environment was rich, lush and beautiful. This had a real Uncharted feel to it, which I think was the intent of the filmmakers, who went the video game route with the story and even put up an Uncharted 4 poster in one of the teen’s bedrooms.

I guess there is a sequel to this coming out in the near future. I’d probably go see it. I’m not sure what they can do to keep the concept fresh but this new take on it worked fine for this chapter in what appears to be a real franchise now.

Rating: 7.5/10
Pairs well with: the original Jumanji and Zathura.