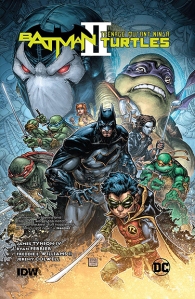 With the huge success that was the Batman and Teenage Mutant Ninja Turtles crossover, you knew a sequel was imminent. In fact, there’s a third series, currently being published, and an animated film has also been released.

I think that this story was a bit better than the first one. I’ve really liked James Tynion’s work on Detective Comics over the last few years, as well as Justice League Dark, and he was the natural choice for merging the Bat and Turtle franchises.

It’s very apparent that Tynion has a passion for these characters and they all just sort of mesh really well together unlike other crossovers that seem forced or are penned by someone who may have a passion for one franchise but not both.

I also like that Freddie Williams II returned to do the art again. I think it really fits the tone of the book.

The plot here is better than the first corssover. It focuses on Bane taking over the Turtles version of New York City. Batman, Robin, Batgirl and Nightwing all show up to lend a helping hand. Eventually, the heroes have to free Shredder from prison and use him to give them an edge over Bane, who now controls the Foot Clan, along with Bebop and Rocksteady.

In the end, I can’t call these classics but they are pretty fun reads. I wasn’t a huge fan of the first one but this arc is better paced, feels more organic and Tynion has found his footing better than the initial outing.

I can’t wait to read the third one, once it’s been collected.