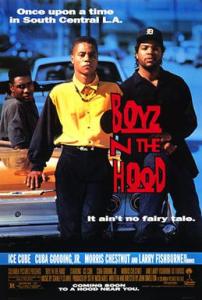 Boyz N The Hood was a movie that had a pretty big impact on me in my middle school years. I was going into 7th grade when it came out but by the time it hit video, I rented it a lot.

What lured me into it was the edge the film had with Ice Cube in it, a rapper I listened to almost daily back then. But beyond that, I was pulled into John Singleton’s unique knack for storytelling. While this is well acted, a lot of the story and emotion comes through in more of a visual way.

Unlike many of the “gangsta” films that came out after and were inspired by this and Marion Van Peebles’ New Jack City, this one is truly a masterpiece on just about every level. And, once seeing this, it is easy to understand how this film gave birth to a new genre in the early ’90s.

To start, the acting by just about everyone in this picture is superb. The main cast delivers their performances with passion and gusto.

I love how in your face Ice Cube can be but there is a subtle gentleness under the surface that really comes out in his final scene, which is still maybe the best he’s ever been onscreen.

Cuba Gooding Jr. gave a somewhat understated performance that worked really well for his character and when the point comes in the movie for him to show real emotion, it has an impact that might have been lacking without his cool and chill demeanor leading up to it.

I also like Morris Chestnut, who is mostly just a regular guy here. He’s got issues but he’s a guy with a bright future, which makes his fate in the film extremely tough to process no matter how many times you’ve seen this play out.

The real scene stealer is Laurence Fishburne and while that shouldn’t be surprising, this was pretty early in his career and even though he’d been in many films before this, it is his role here that put his career path on a strong upward trajectory.

It’s also worth pointing out how beautiful and perfect Stanley Clarke’s score is. The music conveys real emotion and it grounds the drama in a way that the mostly hip-hop soundtrack can’t on its own. There is a great balance between hip-hop, soul and the score itself. However, in contrast to what became typical of this style of film after Boyz N the Hood, this doesn’t use a ton of rap music. It’s there where it needs to be but this wasn’t a movie that was trying to sell soundtrack tie-ins like everything that copied it. And it’s not that that’s a bad thing and I didn’t even notice it back in the day but seeing this film now, it was kind of refreshing knowing that the filmmaker relied heavily on his composer to assist with the tone and the movement of the plot. Side note: Stanley Clarke’s first score was Pee-Wee’s Playhouse, which got him an Emmy nomination.

This is a heavy and emotional film; it works because it feels genuine and real. It has aged tremendously well and is kind of timeless, even if it is set in a specific era that comes with its own stylistic and cultural tropes.

Singleton, with Boyz N the Hood, crafted a perfect motion picture that deserves to be called a masterpiece and is still above all the films that came along and tried to emulate it. Not bad for a first time director.