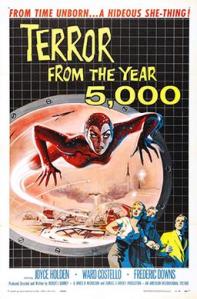 “In the year nineteen hundred and fifty-eight, Man launched the first satellite and pierced the space barrier.” – Narrator

Even for 1950s American International Pictures sci-fi outings, this is a giant turd. By comparison, it makes AIP’s other sci-fi films look great. But I guess this was used for an episode of Mystery Science Theater 3000 for a reason. But even then, this is the bottom of the barrel for the AIP movies used on that show.

The biggest problem with this flick is that it has no energy, it’s boring as hell and when you get to the big finale, it’s as if no one put any effort into it.

Now I can enjoy total schlock. In fact, most of the things reviewed on this site are just that. However, this bores me to tears, even when seen on MST3K.

However, I’m not sure how original the idea for the plot was at the time but this could have actually been ripped off for the basis of the Species film series. While the villain here isn’t an alien, it is a woman from the future who shows up to take men to breed with. There are definite similarities between the two movies besides them both being dull. Granted, Species is much, much better than this film.

The special effects are shit, the acting is boring and Mike Nelson and the ‘Bots are the only reason this motion picture didn’t put me to sleep.

But if I’m being fair, I’ve still seen many movies that are much worse than this one.

Rating: 2/10
Pairs well with: other ’50s schlock that was on MST3K like The Screaming Skull and I Was a Teenage Werewolf.