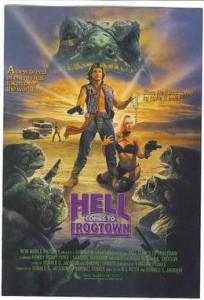 “Hey, you try making love to a complete stranger in a hostile, mutant environment, see how you like it.” – Sam Hell

I always wanted to see this as a kid but not even the video stores in my area seemed to be able to get it. Or they just didn’t want to pay the high fees to bring it in. VHS tapes for mom and pop shops back then were usually around $99 based off of the industry catalogs I used to flip through at one of my stores.

Anyway, time marched on and I forgot about this film until seeing it late one night on cable in the late ’90s. When I stumbled upon it, I was high and drunk but I found it to be completely surreal and wasn’t sure how much of the effect it had on me was the film itself or the chemicals in my system.

I wouldn’t actually get that cleared up until now, in 2019, because I came across this on Amazon’s Prime Video and rented it for a few bucks. I thought that even if it was terrible, “Rowdy” Roddy Piper was a god to me and even if he’s gone, I still don’t mind putting a little bit of cheddar in the collection plate.

This also stars Sandahl Bergman, who I mostly only know from Conan the Barbarian and Red Sonja where she found herself starring alongside Arnold Schwarzenegger in his prime.

As was pretty common with low budget ’80s movies, this one is a ripoff of the Mad Max concept, However, it is a post-apocalyptic comedy that features a pink vehicle and mutant frog people. It’s goofy and crude and sadly, most of the jokes miss their mark, even with Roddy Piper trying to steer the ship. But it’s not his fault, the film’s script is just bad and unfunny.

Piper has charm and it comes through and frankly, it’s the one bright spot of the movie. I also like Bergman but she lacks the charisma I felt she had in those other two barbarian movies she’s more famous for.

I thought the effects on the frog people were pretty good, considering the era when this was made and the budget but the effects aren’t really anything special and the frog characters just make this film so bizarre that it becomes a gimmicky distraction from the already poorly written and mostly dull plot.

But this isn’t a total turd. Piper is still amusing in it. I just wish that this had been one of those rare, hidden gems from a bygone era but it was mostly just buried scrap metal in a post-apocalyptic wasteland.