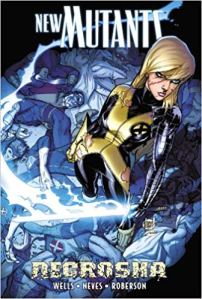 I wasn’t super big into the volume before this one. That could also be due to me not really liking the Legion character, who had a major presence in that book.

This volume finds its footing a bit more and I enjoyed both stories that were collected here.

I like this team, overall, and their dynamic. There are interesting twists to the story but the first half of this collection ties into a crossover event where some of the context is lost, due to this not featuring the parts of the story that weren’t specifically published as New Mutants issues. Also, this volume leads into the big Second Coming event.

Regardless of this being tied to and setting up other stories, I like the chemistry within the group and how the characters are written and how they’re evolving here. In fact, I assumed I’d give up after this volume but I think I’ll give the third one a read too.

I’m a big New Mutants fan and always have been. I just haven’t been very satisfied with their comics since the original run in the ’80s and early ’90s. Zeb Wells’ run seems to be carving out its place in the larger mythos though.

Plus, I dig the art.

All in all, not a bad book, better than most New Mutants collections after the original run and I’m at least interested in sticking with it beyond this chapter in the series.

Rating: 6.75/10
Pairs well with: the volume before this story, as well as most New Mutants stories featuring some of the key original members.