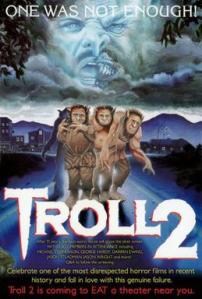 “Nilbog! It’s goblin spelled backwards! This is their kingdom!” – Joshua

It’s no secret that Troll 2 is a bad movie. With that, it has a pretty large cult following. Many people, however, don’t seem to understand that this is also intended to be a comedy and it seems like it is pretty self-aware. I think a lot of people hate it without understanding it and the intent of its creators.

Personally, I think that Troll 2 accomplishes what it set out to do and exceeds what its intent was. I also think that it wouldn’t have grown into a weird phenomena if audiences didn’t initially misinterpret that intent and thought that this was a serious attempt at low budget horror.

What’s funny about the film, is that the script was written by a husband and wife team and it started out as the wife expressing her anger over all of her friends becoming vegetarians. I think she definitely found a very creative outlet with a lot of good tongue and cheek humor to exorcise that frustration. As a devout carnivore, I understand and empathize with her pain.

Everything about this movie is bad in the text book sense.

The special effects, all of which are mostly practical, physical effects, are bottom of the barrel schlock. But that stuff works within the context of this movie.

Also, the acting is literally laughably bad and I’m not misusing “literally” when I say that. I think some of the poor line delivery was definitely intentional. I’m not saying that their is hidden genius at work but I think that some of the scenes and specific moments give away that this was meant to play out the way it did. But honestly, I don’t know how the actors weren’t ruining takes by laughing out loud. But maybe they were.

The plot is weird, nuts and so far out there that there is no point in trying to take it seriously. You’ve got a crazy witch lady with a troll army that transforms into town folk, who feed you green goo that transforms you into a plant and then another type of green goo so that the trolls can devour your remains. Also, this film has supernatural popcorn and moles in the shape of cloverleafs.

Troll 2 is a much better experience than I thought it would be. I actually put off watching it for years but once I finally did, for the first time a while back, I was pleasantly surprised by it.

Yes, it is still a bad movie regardless of it intending to be and I can’t give it a great rating. However, it is an entertaining watch for those of us who love being entertained by bad movies. In a lot of ways this is to fantasy horror what Tommy Wiseau’s The Room was to romantic drama.