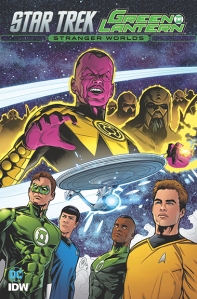 While I wasn’t super fond of the first Star Trek and Green Lantern crossover, I bought both volumes so I had to give this one a read too. I’m glad I did though, as this one was better than the first.

The main difference is that this story really had its footing. The first arc served to establish this alternate reality where Lanterns and the Kelvin timeline of the Star Trek universe co-exist. In this volume, the story just bursts out the gates, running.

All the weird bullshit with the Black Lanterns and zombie Vulcans is over, which was refreshing. Instead, we get the Manhunters from Green Lantern lore and the return of the Benedict Cumberbatch version of Khan Noonien Singh. And Khan acquires Atrocitus’ red ring. Khan also has his entire crew by his side, which makes him an even more dangerous threat.

I’ve got to say though, I’ve really enjoyed Angel Hernandez’s art in both of these crossovers. He illustrates the characters’ likenesses really well. Plus, his style captures the tone of the Kelvin movies superbly.

There are some neat surprises in this chapter of the saga and it leaves things open for more. I’m not sure if there will be a third crossover for these two franchises but I’m not opposed to it.

At the end of the day, this didn’t blow me away but for a fan of both franchises, it was a fun experiment to read.