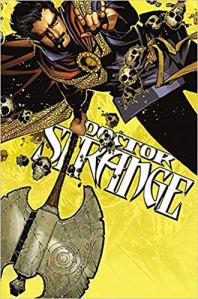 It’s been awhile since I’ve read Doctor Strange. I used to love picking up back issues of stuff from the ’70s and ’80s when I was a kid. But I didn’t like much of the late ’90s or ’00s stuff. But I heard good things about Jason Aaron’s run, so I figured I’d start at the beginning and give it a shot.

This was a pretty fun read and it’s creative, as well as interesting. I also really liked the art style.

My only real complaint is that this Doctor Strange doesn’t seem like the same character I enjoyed in his classic stories. He’s lacking the sense of authority one got from him in the ’70s and ’80s and here he is just kind of quirky and goofy.

Despite that, it’s not a big distraction, it’s just that the character feels off. It’s also very salvageable moving forward and it doesn’t deter me from reading more from Aaron. Hopefully, he finds his footing a bit more after this first story arc.

The threat here also doesn’t feel as big as the story makes it out to be. I guess I’ll have to see what’s next but knowing what Doctor Strange has faced before, this threat seemed lame and unconvincing. Sure, all other Sorcerer Supremes from other realms and worlds are gone but the story still feels thin and is missing the weight of that.

I’ll give the second volume a shot in the very near future, so I hope that sort of rights the ship.