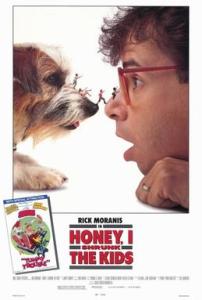 “Nick, I’ve got six hours to get home, get big and get to the mall. Now get moving.” – Amy Szalinski

It’s hard for me to wrap my head around the fact that one of the writers of Honey, I Shrunk the Kids is Brian Yuzna, the guy behind Re-Animator and its sequels, as well as From Beyond and Society. In fact, this film came out in the same year as the over the top and insane Society. Talk about two extremes.

Anyway, this family classic was one of many reasons as to why the summer of ’89 is probably the best summer for movies of all-time. I loved this as a kid and it has held up pretty well.

Some of the effects look a bit dated, as this came out just before the CGI boom that came with Jurassic Park in 1993, but the use of green screen and stop motion effects pretty much comes off without a hitch and these special effects are top of the line for 1989. Disney crafted an incredible world for this movie and all the physical sets still look fabulous by 2019 standards.

The movie is also kind of timeless and the humor still works. This isn’t a film that’s chock full of ’80s cliches. Okay, maybe the clothes the kids wear are very ’80s but this is written in a way that the jokes and humor aren’t as dated as other films from the time.

Additionally, all the kid actors are pretty solid, as are the parents. The parents of course get top billing in this movie but the bulk of the film is focused on the children and their adventure, trying to get home from the other side of their backyard. Of course there are several challenges that stand in the kids way, which just makes this adventure a lot of fun and actually provides a good amount of real tension.

Rick Moranis is as good as he always is but the real scene stealer was Matt Frewer, who owned the character of Russ Sr. Frewer can do drama and comedy well but here he was so committed to the bit that he was the biggest bright spot in the film.

I’m glad that I revisited this and I’ve just realized that it’s approaching its thirtieth anniversary. Man, I can’t believe it’s been that long since the epic summer of ’89.

Rating: 7.25/10
Pairs well with: the sequels but each one gets worse and worse, as well as other late ’80s family sci-fi movies like *batteries not included and Cocoon.