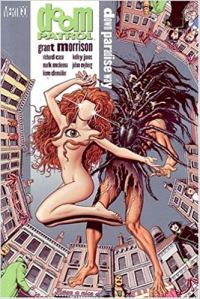 While I’ve really enjoyed getting this far into Grant Morrison’s legendary run on Doom Patrol. This volume didn’t hit the mark quite the same way for me. But that could also be due to the luster and newness of this bizarre series starting to run dry.

I wouldn’t say that I’m bored with it but it’s so far out there that the stories are overly fantastical and it is hard trying to ground this in any way that gives it some sort of emotional weight. I like the characters but the proceedings are too surreal, all the time.

The first volume took me by surprise and was so unique that it was hard not to get drawn into it. The second volume brought the Justice League into the mix and it grounded the craziness somewhat, as the well-known DC Comics characters almost became the eyes and ears of the reader.

Here, it’s just Doom Patrol once again, as they are thrown into another dreamlike sequence that isn’t very easy to follow or grasp. I’ve always loved surrealist art but it exists well as its own thing and I dare anyone to try and make a narrative that can string together all the scenes Salvador Dali painted in some sort of coherent way.

Granted, art and the effectiveness of storytelling are all subjective but, at this point, I’m not sure what I’m reading and if there is even any sort of plan with Morrison’s Doom Patrol or if he’s just throwing really colorful shit on the canvas and hoping the reader somehow connects the dots for him.

I like Morrison’s imagination but this was also really early in his career and not as refined as his work would become with more experience. However, this is still a really unique experience and the fact that this exists within the larger DC universe is kind of interesting and sort of cool.

At the end of the day, no one can say that Grant Morrison’s Doom Patrol wasn’t ambitious. I just don’t know if this ambition is going to pay off in any meaningful way. But again, that’s subjective and this may speak to a lot of people.

Rating: 6.5/10
Pairs well with: the rest of Grant Morrison’s run on Doom Patrol.