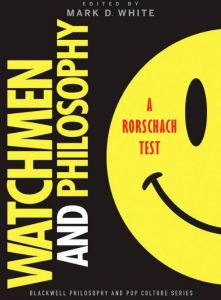 There are philosophy books for just about every major pop culture franchise or major property out there. I do really like reading them though, as it gives some interesting insight and depth to characters and story. Sometimes these sort of books are filled with a lot of drivel but that doesn’t mean that they’re not entertaining in their own way.

This one seemed low on drivel and really got to the core of a lot of the characters within the Watchmen story. What makes this really interesting, is that the Watchmen universe has expanded since this book came out. We now have prequel comics, sequel comics, a movie, an upcoming television show and probably new stories with these character for years to come.

What makes this cool is that there’s a lot of good analysis in the book that can be applied to the characters when observed in these new stories and through different mediums.

I wouldn’t call this book a “must own” or anything but I’ve always enjoyed philosophy and I certainly love Watchmen.

This is just one of dozens (maybe hundreds) of books like this but it is well organized, well edited and none of it seemed like filler.

I found this to be easy to digest and an enjoyable read.

Rating: 7.75/10
Pairs well with: other books about philosophy and pop culture franchises, as well as the original Watchmen comic.